The belief, as an object of furniture as we know it today, was born in about 1600 in Emilia-Romagna and was originally a low and long piece of furniture usually placed in the banquet hall. Above it were placed in plain sight all the food in their dishes during lunch offered by noble families to their guests of particular rank and importance. Before starting the banquet, a particularly trustworthy servant of the family, called "Maestro Credenziere", endowed with a particular livery that distinguished him from other servants, entered the banquet hall to "make the cupboard", ie he entered the banquet hall and it was placed next to the piece of furniture where all the dishes had been placed with food, which will later be called belief, and tasted all the dishes before they were served to the guests and then, addressing the guests with a deep bow, said: " Gentlemen, you have been offered a service of belief ", also remained in the banquet hall for the duration of the banquet.

Since ancient times it was common practice to offer sumptuous banquets in honor of an illustrious guest, or to celebrate particular events, and in the Middle Ages this practice became very frequent especially to celebrate the alliance between two Lords, often crowned by the marriage of the sons of the two families In fact, when a Lord wanted to enlarge his fief for power hungry, he had only to wage war against another Lord his rival to encompass his possessions.

When this option was not possible, an alliance was resorted to, often sealed by rich gifts and prebends or, but not always, by the weddings of one's own children to learn the two Lordships, and it was precisely on such occasions that sumptuous banquets were held in honor. of the former adversary, but since in this same historical period it was also very popular to eliminate political opponents with poison, even during a banquet, here the practice of "making the sideboard" was affirmed.

This practice was aimed at reassuring the guests that the foods offered to them were not poisoned and that's why the "Master Lecturer", after tasting all the foods, remained in the banquet hall until the end of the banquet, just to ensure that he himself had been poisoned, giving "belief", creating persuasion in all the guests of the goodness and purity of the foods offered, but above all that there was no evil intention on the part of his Lord, or that of poisoning some of the guests.

The term then passed to indicate the process of "belief" and then, probably, the room intended for this practice and finally the piece of furniture. 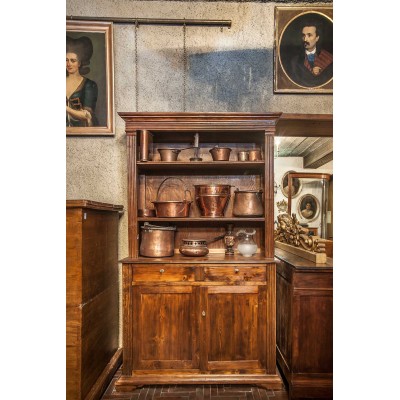