"Some limelight spoil the complexion, to a girl."

The flap is movable with a hob that opens horizontally to become a desk supported by removable uprights or chains.

Among the furniture of cabinet makers (or inlaid or veneered), a special place belongs to the cabinet, often in ebony, ivory, lacquer, encrusted with metals and hard stones, widely known the commode and the bureau. A novelty is the so-called mazzarina desk (or more precisely, a bureau à gradin), with eight legs generally with a balustrade connected by a shaped crosspiece.

Among the production to menuiserie (or intaglio) is cited the gueridon, the console, the pied de table; between the seats the pliant, of very ancient origin in the characteristic legs with X-shaped supports and the tabouret, stool destined to court to the ladies of the high aristocracy.

At the end of the century bureau and trumeau decorated bedrooms and intermediate rooms, while the canterans, in large numbers, had ended up replacing a piece of furniture whose long state of service had now come into disuse: the caisson. In its place, along the halls or halls and arranged in the endless corridors of the noble home, beautiful show of chests or notched sideboards, most often lacquered or marbled. 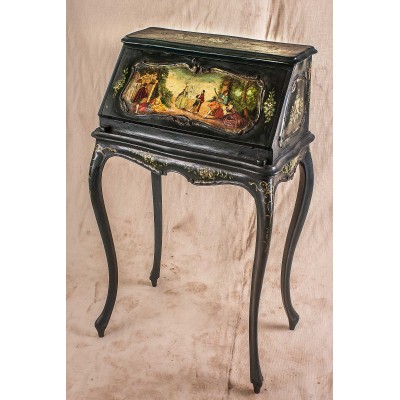 Piece on four "roe deer" legs which has a hinged door to form a writing top, in which there are five compartments and two drawers.